– The Effects of Feed Supplementation with Licorice –

Introduction
Modern genetic selection has resulted in dairy cows with higher milk yields. Post partum problems caused by reduced liver function such as ketosis and mastitis, metabolic diseases such as displacement of the abomasum and subclinical ketosis in particular are on the rise and investigations are underway to address these issues.

Subclinical ketosis is a condition preceding ketosis that is caused by insufficient energy supply postpartum and/or impaired liver function. Symptoms include ketonemia and ketonuria (or ketonlactia). It is known that 10 to 30 percent of dairy cows in early lactation exhibit subclinical ketosis leading to loss of milk yield, reduced reproductive performance, reduced immunity and occurrence of peripartum diseases.

Subclinical ketosis can be screened for or monitored by evaluation of ketone bodies (3-hydoroxybutyrate; BHBA) found in blood, urine or milk. While blood BHBA levels in healthy cows are below 560 µM/L, cows with subclinical ketosis will show levels higher than 800 µM/L. It has been reported that once blood BHBA levels rise above 1,400 µM/L, incidence of displacement of the abomasum increases by three-fold. Further, digestive system diseases and liver function disorders due to mycotoxin contamination in stored forage are also occasionally seen.

Here, we studied the effects of licorice, a medicinal herb known to improve liver function, on maintaining liver function in peripartum dairy cows when added to their diet.

1.What is licorice?
Licorice is the root of a legume plant native to East Asia. In human medicine, it is known as a medicinal herb containing glycyrrhetinic acid as a major component that has an effect to improve liver function. In livestock, its effects to improve reproductive problems and immune function when added to feed are being studied.

2.Supplementation of licorice to feed
15 pregnant cows reared at our school were used for this study. The 15 cows were allocated to two groups; 5 to the control group and 10 to the licorice group which received 200 g/head/day (contains 20 g of licorice) of licorice pellets added to their feed.

The licorice pellets were fed for a total of 120 days starting from 30 days prior to due date until 90 days postpartum. Blood samples were taken on six occasions; on day 30 prior to due date, the day of parturition, days 14, 30, 60 and 90 postpartum, and results were compared between the two groups.

3.Results
To evaluate liver function of cows, changes in blood 3-hydoroxybutyrate (BHBA) concentration, serum GOT activity and serum free fatty acid level (NEFA) were compared between the control and the licorice groups. Results are shown in Figures 1, 2 and 3. 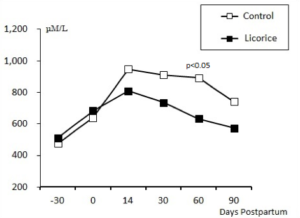 Figure 2. Comparison of Serum GOT Levels 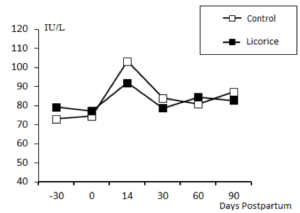 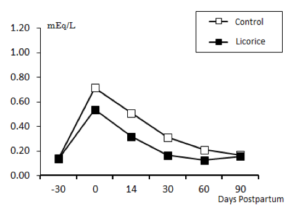 As the result, reduced blood BHBA, serum GOT activity and serum NEFA levels were observed in the licorice supplemented group. Thus, it was confirmed that adding licorice to the feed avoided subclinical ketosis and maintained healthy liver function during the peripartum period in these dairy cows. This was assumed to be a result of the effect from the main component of licorice, glycyrrhetinic acid, leading to an improvement of liver function.

Based on the above results, it was confirmed that supplemental licorice in feed may be beneficial to mitigate subclinical ketosis and to maintain the liver function healthy. Currently, its effects on milk production and reproductive performance are also being investigated.

Modern genetic selection has resulted in dairy cows with higher milk yields. Post partum problems caused by reduced liver function such as ketosis and mastitis, metabolic diseases such as displacement of the abomasum and subclinical ketosis in particular are on the rise and investigations are underway to address these issues. 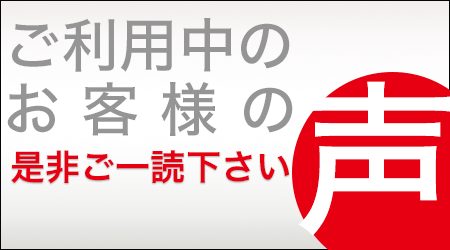 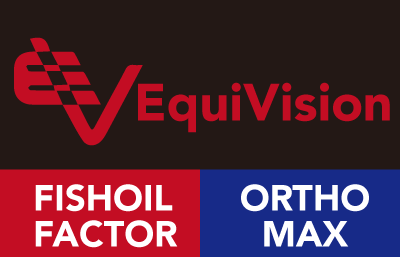